When I was a little girl, having a pink birthday cake with a ceramic princess sitting on top of it was a dream come true. There were a few choices back then and you either got a chocolate, mocha or vanilla cake with flowers on toothpicks stuck all over the cake and they either came from Merced, Fortune, Goldilocks or your local bakeshop. Now a days, they’ve got all kinds of stuff like princesses, bratz, plants, zombies, all kinds of critters, superheroes and birds. There’s a gazillion places to get your cakes from and you can even order online. In preparing for Sofie’s 4th birthday, we asked her what she wanted to do since it’s the first time she is going to celebrate her birthday in school. She said she wanted to have a party, so we said yes. She wanted balloons, check! She wanted a cake, an angry birds cake! Hmmm.
Mommy: Anak, how about a princess cake?
Sofie: No, I want Angry Birds.
Mommy: How about a Dora one.
Sofie: No, that will not work. I want Angry Birds cake.
Okay, she knows what she wants and we are going to have an Angry Birds Party. Hubby and I scoured the tianges to look for Angry Birds loot bag items. I have to say it was quite easy, they’ve got all kinds of Angry Birds stuff, and I mean all kinds! From pens, stationery, toys, shirts, even mini-fans. Seriously!
For the cake I turned to my best buddy, Google, to look for cake makers in my area. After a couple of clicks I found a couple of suppliers but their prices were a bit steep (Php100+ for a character cupcake!) and we really couldn’t find a design we wanted. So, as always I decided to make the cake myself. First, I tried it on play-doh to see if I can make a decent looking Angry Bird. It looked fine, well, cute really! I understand the fascination now. 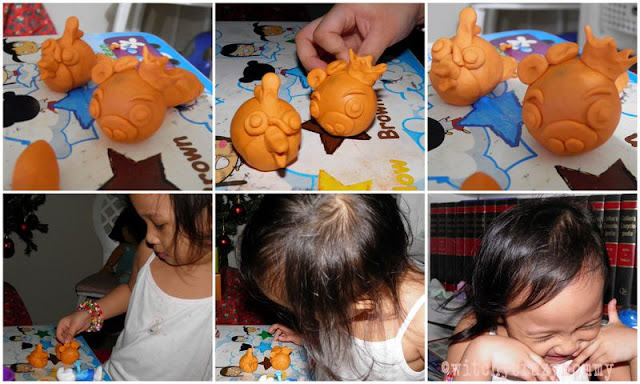 First thing was to make the fondant, for the recipe and how-to, I asked Google again. For the marshmallow fondant, I used a recipe I got from Yummy magazine and for the birds I must have studied every single tutorial there is. Not really but it was a LOT! 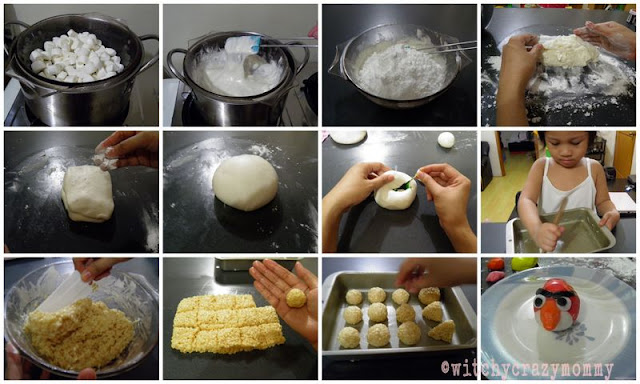 I used rice krispie treats wrapped in fondant to make the pigs and birds. One tip I learned about all this is to have a bowl of shortening on hand, to keep things from sticking everywhere. It beats getting a hand paraffin, my hands were soft and supple after making a batch. Plus, I had fun making those nasty birdies! 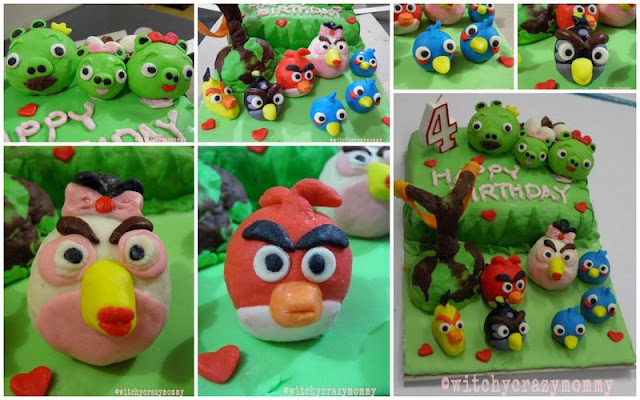 For the sling shot (we just had to have one) I tied two straws together, you know the bendy kind, and wrapped that in brown fondant. For the cake, I have to admit I cheated. I’m a big cheat, cheater, cheat twat and for sure the pastry goddess will frown on me for using a cake mix. Then again, I’m no Martha Stewart or Betty Crocker and I only did it this one time, so there, I said it. I used a cake mix!
As much as I would love to do a full-on tutorial, I can’t! So here are my sources:
Marshmallow Fondant Recipe by Yummy
http://www.yummy.ph/recipe/marshmallow-fondant
Angry Birds Toppers Tutorial from Several Fabulous Sites
http://www.purejoyeventsblog.com/2011/11/tutorial-angry-birds-fondant-toppers.html
http://www.instructables.com/id/How-to-Make-Edible-Angry-Birds/
http://bakehappy.blogspot.com/2011/08/how-to-make-angry-birds-cupcake-toppers.html