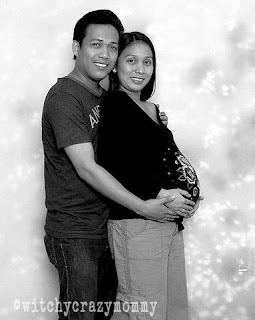 For the past year this blog mostly contains musings about me and my daughter, but there is one character who has not been given enough press. He’s the one who is always there to support, guide, humor and take care of our family. He is often quiet, rarely the center of attention but here in our little world he is as important as the sun is to flowers.
This month I am joining Mommy Moments to celebrate the number one man in our lives and his journey through fatherhood.
When we first got married, we did not plan to have a baby right away, we wanted to have our fist year just for ourselves. I guess God has his own plans and our daughter was also in a hurry to play with us that I got pregnant 3 months after the wedding. I was delayed for three days and since my monthly cycle was always on the dot, I got a pregnancy kit (we always kept one around) and took the test, it was in the middle of the night and Hubby was already sleeping. The moment I saw those two pink lines, I knew, but I took another PT and tested again. There it was, two pink lines!!
I must have screamed like a crazy woman, woke up Hubby and practically dragged him out of bed. When he saw the kit, his eyes swelled and all he could say was “How did that happen?!” and I was like, “What do you mean, you knew how it happened?!”. We started laughing like we escaped from the loony bin, we couldn’t believe we made a human being. Hubby was so happy and nervous at the same time, he thought I would break if I bumped into something. I had to constantly remind him that I was just pregnant and pregnancy is not an illness. He was very,very supportive and understanding of me and my hormones when I was pregnant up until I gave birth. I guess up until now, ha ha! 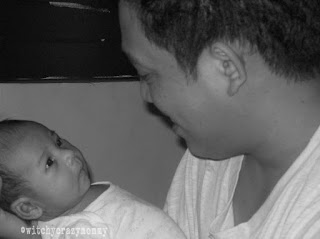 He was so excited with the new baby but for some reason, Sofie and Hubby did not do well with diaper changing. My kid would always cry and even poop sometimes, while Daddy is changing her diapers but of course she always played nice with mommy. One time my husband felt so bad, he told my kid, “May favoritism ka!“, it was my time to be supportive and help him, especially with the smell.
Although he is not the best baby sitter, he tries really hard. Of course, he is not as good as me, but he tries. One time I left them alone, Hubby insisted that I go out for some “me time“, since I was starting to go nuts again. An hour passed and he was already texting me that the baby was crying and that he checked for poop, hunger, fever, everything but nothing worked. I told him I was going home, when I got there I found the baby sleeping on the sofa and my Hubby looked simply haggard and just watching her. I asked him what he did and he said, he placed the baby on the sofa and sternly told her ” You always want me to carry you, what if I asked you to carry me?!”. Sofie seemed to understand Hubby’s difficulty, he said and my 2 month old stopped crying and fell asleep.
I don’t know what it is about the two of them but they seem to have their own lingo, Hubby has his own style of “talking” to Sofie and it works, they are the best buds and Sofie loves him like crazy.
A bit late but still . . . written for