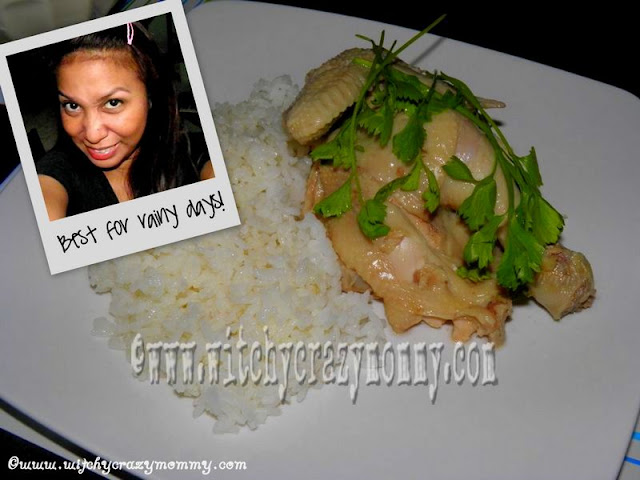 The Hainanese Chicken Rice is originally a Chinese dish from the Hainan province, it was made of a whole chicken simmered in chicken or pork stock that they reuse multiple times, adding water only when needed. The chicken is paired off with flavorful, oily rice cooked in chicken stock. The dish was later on brought to Malaysia and Singapore where it was given new twists.
I first got a taste of the Hainanese Chicken Rice at the Marriott Hotel in Cebu when I was in college. My sister introduced me to this gingery delight she first tasted in Singapore. I am not a big fan of ginger but when I tasted the juicy chicken meat, the plump, jellied chicken-skin  and the gingery soup, I was hooked. As with first kisses, it was the dish that I would judge every Hainanese Chicken Rice against.
I have been trying to imitate the taste and used my husband-then-boyfriend as my test subject until it became one of his favorite dishes. He actually became quite the expert in tasting the “perfect” Hainanese although he enjoys his rice plain and unflavored. For this recipe I will only be cooking the chicken in Singaporean style, because honestly I do not know how to cook rice without a rice cooker. (Yes, I’m a bad, bad Asian).
The closest I have come to imitating the “Marriott Hainanese” was last night, I changed up some of the ingredients a bit and here’s What’s Cooking.
WhatYahNeed: 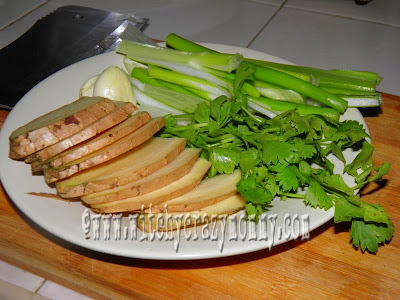 1 (about 1kg) whole fat chicken
1/2 cup rock salt (for cleaning)
6 inch ginger, sliced
3 cloves garlic
1 stalk leeks cut in long strips
2-3 liters of water
2 tbsp sesame oil
5 tbsp fish sauce
crushed pepper corns
salt to taste
1 tbsp sesame oil for brushing
kinchay or Chinese parsley for garnishing
Large bowl of iced water
WhatYahGottaDo:
1. The trick to a really good Hainanese is to have a really fat, flavorful and clean chicken. Wash the chicken properly and take a handful of rock salt and rub it all over the chicken. Give the chicken a “mini-facial” and scrub it gently with the salt to “exfoliate” the gunk away. Wash the chicken again and pat dry to reveal the tight, clean, nice pores. Be careful not to tear the skin or bruise the skin, with a small sharp knife, cut away the excess fat and set aside. 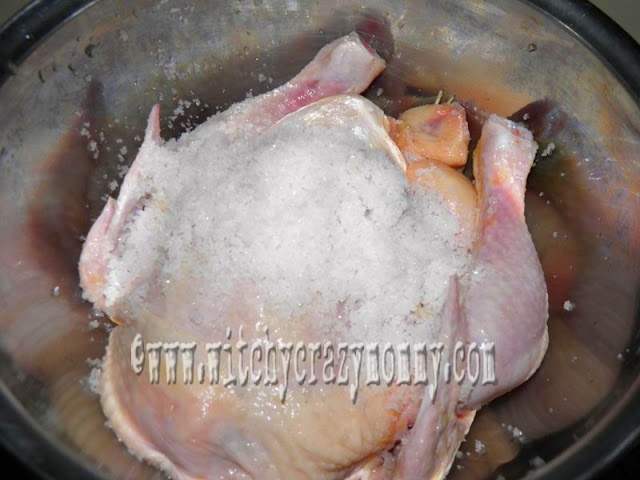 2. Rub the chicken with a tablespoon of rock salt both inside the cavity and on the skin. Stuff the garlic, half of the ginger and leeks inside the chicken. Some use scallions or spring onions but I find that leeks have a milder, sweeter flavor so I am going with my gut, since . . . well, it’s my kitchen. 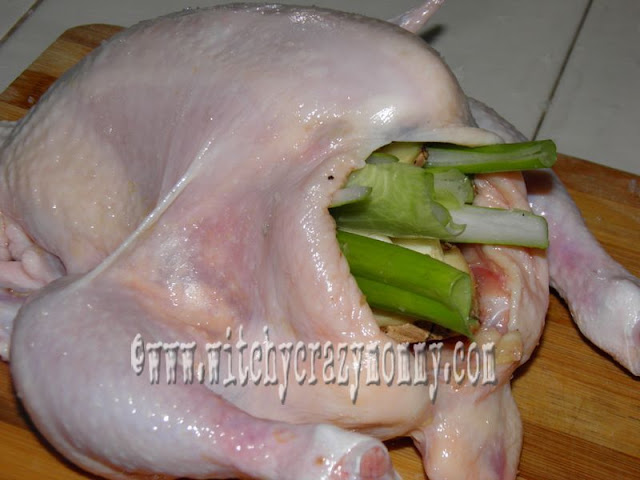 3.Place the “stuffed” chicken inside a pot, toss in the rest of the aromatics as well as the fish sauce, pepper corns and excess chicken fat. Fill the pot with water, it  should be covering the entire chicken. Put the pot in medium heat until the water begins to boil, then turn down the heat to bring it to a simmer. The chicken needs to simmer for about 30 minutes, partially covered. Never at any point should it be allowed to boil, boiling will cause the bones to darken and overcook the chicken. So NOT cool! 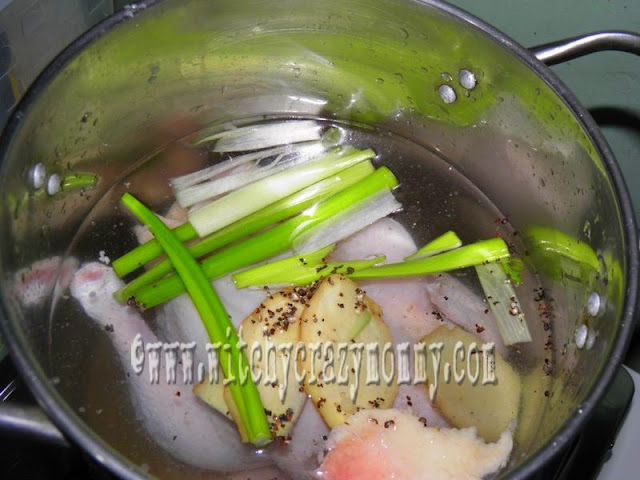 4.Remove the scum that float to the surface as the pot simmers. Resist the urge to constantly poke or stir the pot, this will result in a cloudy stock. Be patient. I am not THAT patient and I couldn’t stand still in the kitchen for 30 minutes to save my life BUT, for the perfect white chicken. . . BE PATIENT, you pot-stirrer you! 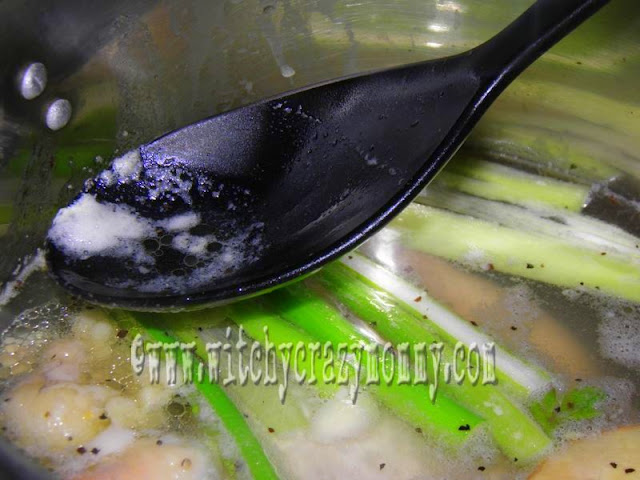 5. After about 25 minutes, use a tooth pick and prick the inside part of the chicken leg, if the water runs clear then you are good to go. Remove the chicken from heat and allow to sit in a covered pot for about 5 to 10 minutes. 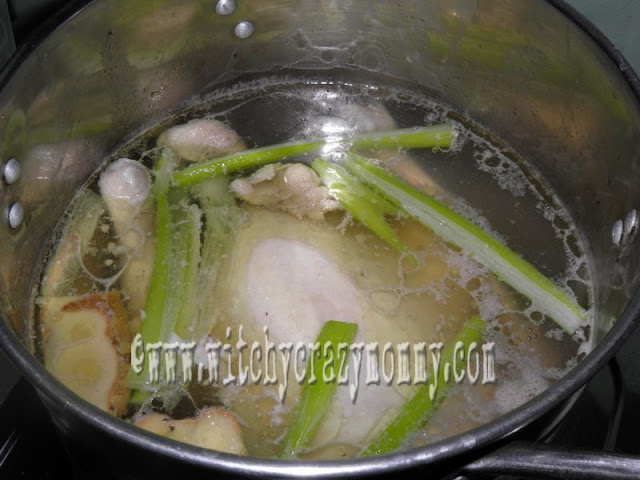 6. Using 2 big ladles or slotted spoons , lift the chicken from the pot and drop it on your ice bath to stop the cooking process, this will also give the chicken skin that nice, jelly like consistency. Note that I mentioned using a ladle. Using thongs, forks or even lifting the chicken by the legs won’t work, they just tear the skin and can even cause your chicken to take a dive in the ice bath giving you an unnecessary bath. 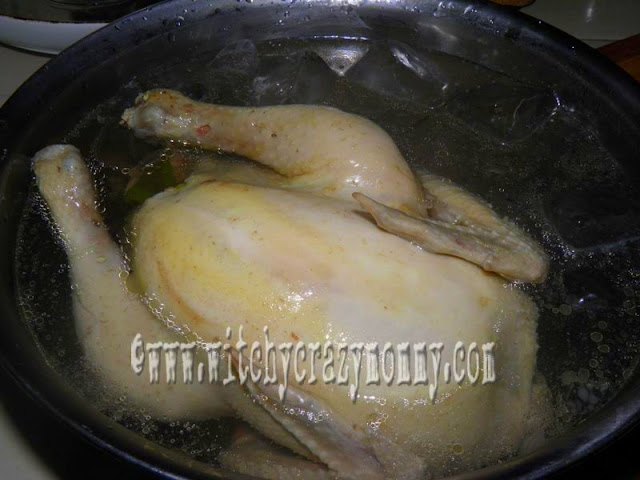 7. The chicken should cool in about 3 minutes, remove it from the iced water, cut in half and slice across the breast. You can remove the rib cage if you are up to it, Chinese chef’s chop them up bones and all. Plate your dish, brush the chicken with sesame oil, top with parsley and serve with steamed rice and 3 Hainanese Chicken sauces
. 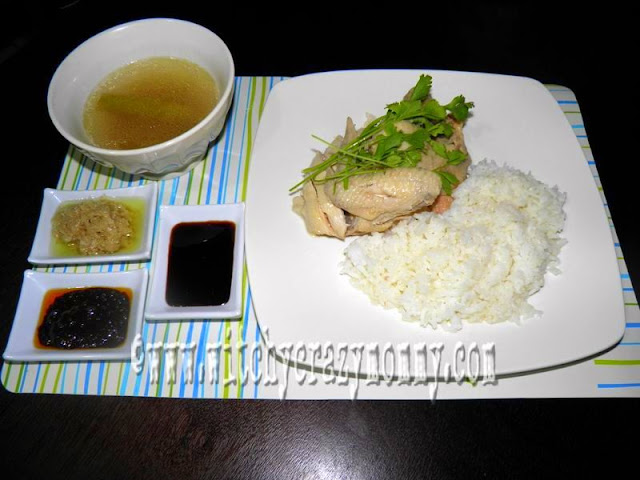 Ooops: Don’t forget about your stock, serve it together with the Hainanese Chicken. I like to drizzle some of the soup on top of steamed rice for more flavor.
Now what shall I cook next, any suggestions?! Let me know in the comments sections.