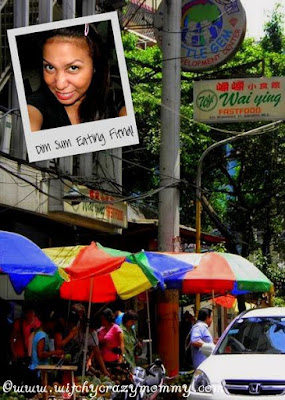 A few weeks ago hubby decided to give me the “Grand Manila Tour” and  showed me around Intramuros and Fort Santiago for my mommy’s-day-out. In the spirit of immersing ourselves in the feel of downtown Manila, hubby and I decided to look for something to eat in the area. Since our ultimate comfort food is always dim sum, we decided to check out this much talked about Chinese fast food, Wai Ying in Binondo. We didn’t know how to get there, so we rang up our friend and Binondo map to give us instructions. We took a cab and after a couple turns and pointless weaving in and out of street corners, we decided to go on foot and ask the locals.
We found Wai Ying Fastfood at the corner of Benavidez and Salazar streets in Ongpin, it was a nondescript hole in the wall with a bunch of umbrella fruit carts parked in front. The place was a bit narrow but it had 2 floors and smelled like the stuff foodie legends are made of. There was brewing coffee and tea, the smell of roasting duck and steam coming from a collection of bamboo steamers. It was actually a bit dirty, the floor was a bit sticky and there were no signs of a high-chair. It did not seem like a kid-friendly restaurant and looked more like an air- conditioned canteen, but it was packed with people, some were even standing while waiting for other patrons to finish.  Plus, we were hungry and there was the unmistakable scent of yummy dim sum in the air.
As soon as we got seated, the server a.k.a “Ate” (older sister) gave us our chopsticks, plates, bowls, other utensils and two steaming glasses of their service tea, probably Oolong but it was so diluted, I couldn’t tell anymore. Their menu is incredibly cheap with dumplings starting at Php55, mami at Php 95 and rice toppings at Php 140. Patrons can even buy frozen dumplings to bring and cook at home.
The first thing we ordered was the White Chicken Mami, it had the thin Hong Kong noodles that I really like and at first I thought there was just one piece of chicken but as we dug deep in the bowl, there were actually about 6-8 very tender pieces. The soup was very comforting, just the right amount of seasoning, we did not need to put any patis  or pepper.
The Siomai had chunks of pork and whole shrimps and compared to others I’ve tasted this one is probably one of the best.
The Hakaw was absolutely divine, the wrapper was paper thin but still strong enough to hold the lightly flavored soft-egg dough and several pieces of  sweet whole shrimps. I can eat maybe 2 or three orders on my own if I unbuttoned my pants.
The meal would not be complete without hubby’s favorite, Steamed Spareribs. It was good, tasted like the usual steamed spareribs, but this one had more meat in it and at Php 55.00 I am not complaining.
We also tried the Chiu Chiao Dumpling that neither of us have ever tried before. It had peanuts, pork, ginger and scallions wrapped in a  slightly thick but translucent sticky rice case. The dumpling was huge, I had to eat it in several bites, it was juicy with a hint of sesame, it was so good that i did not even use the dipping sauces because I didn’t want to spoil the flavor.
Of course a meal is never complete without rice so we got  Fried Rice, one order was enough for two people and it was served in a cute wok. It sort of tasted like Yang Chow Fried Rice but the flavor was  mild that it did not interfere with the rest of our food.
It was one of those meals that Hubby and I rarely spoke to each other, if we did the most we said was “mmmmm”!We paid only a total of Php 460.00 and we were stuffed, happy and definitely coming back sans the toddler.
Mom Foodie Verdict:
Food – 5/5
Service – 3/5
Ambiance – 2/5
Value – 4/5
Kid Friendly- 2/5
Average Price/Meal per person –  Php 150.00
Wai Ying Tea House, Sta. Cruz
927 Benavidez St., Sta. Cruz
Manila, Metro Manila
(02) 254-3326
Open Daily 10:30 am-2:00 am