I am super crazy about Chinese food, specially noodles and dumplings. There’s nothing like a perfectly round, meaty and juicy dumpling and a bowl of piping hot noodles to make me happy. Needles to say, hubby and I are always on the prowl for good Chinese near our neighbourhood.  I have been hearing about Crystal Jade  epic Xiao Long Bao for quite some time now, I even pass by the restaurant in Greenhills during my morning jogs but for some reason we have never tried it until today.
As we were approaching the restaurant, the first thing I noticed is the kitchen, it was open for public viewing separated from the world only by a glass wall. This is a plus for me, as a mom I want to make sure that the food my daughter will be eating is made in a very clean kitchen. And it is. . . with chefs from Hong Kong to boot. We later on found out that the restaurant in Greenhills is their one and only branch in the Philippines.
The first thing we ordered is of course their fabled Xiao Long Bao or Soupy Pork Dumpling with meat and soup inside. Yup, soup in those small little buns. The xiao long bao was served with a light ginger soy sauce,  I dipped mine in chilli oil for an extra kick. The dumpling exploded in my mouth with what I can only describe as  heaven!!!

Next thing on the menu was the Noodle with beef in Spicy Soup, we were worried since it could be too spicy for my daughter. The server was very considerate, he separated our order into two bowls and served the Spicy Sesame Oil separately. We did not even ask him for this, I’m pretty sure he has kids! The beef just melted effortlessly in our mouths and the soup was very comforting. The soup is similar to Pinoy Bulalo but the chinese parsely combined with the chili sesame oil gave the noodles a distinct flavor.

Another hit that we will surely be back for is the Sauteed Chicken with Cashew Nuts in Spicy Sauce. It can be eaten in two ways, topped over rice or wrapped in pancake that came with the dish. The pancake was very much like Indian roti but it was slightly thinner and softer. Although the chicken had a lot of chillies, it did not kill the other flavors, you can still taste the sweetness and smell the aroma of the herbs. The cashews were quite crunchy as well, giving the dish a real punch.

Our daughter loves finger food so we also ordered some stuff that she will like, all of her leftovers of course ended up on my plate but I did not complain. We had the Pan-Fried Shanghai Pork Bun, it was a tasty treat that was a cross between Siopao Bola Bola and Siomai. I swear I could’ve finished 10 buns if there was enough room in my pants. We also enjoyed the Deep Fried Cua Pao served with sweetened condensed milk, it was both a side dish and a dessert. 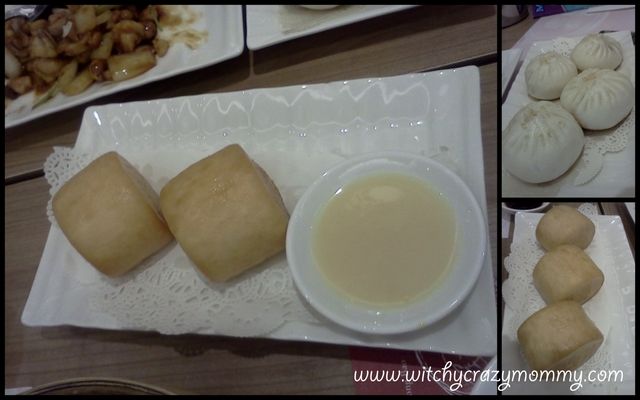 We had a great meal and will definitely come back for more. The food was great, we loved the service, it was clean and the fact that even though the interior seemed kind of boring for a toddler, my 3 year old was very much intent on attacking the noodles and did not roam about. It was a big plus!
Mom Foodie Rating:
Food – 4/5
Service – 4/5
Ambiance – 3/5
Value – 3/5
Kid Friendly – 3/5
Average Price/Meal per person –  Php 400.00