You know how parents always talk about the terrible two’s, like how they are at the end of their ropes with their kid’s tantrums, antics, weird ways? See, when I had Sofie I expected that to happen. I have read and re-read all the parenting tips, my What to Expect series from while she was in my tummy until she became a toddler. When she turned two, I braced myself for the worst toddler behavior but then nothing. Sofie was the nicest happy little camper any mom of a two-year old would ask for. She had her moments but it wasn’t that “terrible” at all, and at times it was even cute. So, I thought, yeah I got this parent thing going. Until she turned three. Terrible three’s, so there is such a thing.
She would throw fits for no apparent reason, there was one time that she had a melt-down at the mall when I told her we can’t buy that toy. Oh boy! This never happened before! I thought at three she would be reasonable enough and we could talk things out. Then I realized I was crazy for thinking this, she’s three not a 20-something-scientist! One night before going to bed, we were having a little chat I was asking her if she wanted to go to toddler school like when she had her music/playschool classes before. I said “You’ll like it there, we will play with teacher and your classmates” So she asked me what a classmate was and I told her that they are her friends. Then she said one of the most heart breaking things a mother could hear, “but I have no friends outside”. So there it was, I know she loves me dearly but sometimes playing with mommy just doesn’t cut it anymore. People need people and my tiny little person knew this more than I did.
Not that I’m a recluse, but I guess all the partying has already left me along with my 20’s. Now, I’m more of a homebody, which is new. Oh boy, if you knew me when. . . . that’s for another post. Back to what I was saying, since it’s just the two of us (and the cat) most of the time, my social life revolves around her and online. My best girlfriends are either busy with work, a new baby or out of the country and we only get to talk online. Thank God for Facebook!
You may be wondering why on earth don’t we play with the neighborhood kids. We’ll we’re not exactly in the suburbs and the neighborhood kids, I will say it again, not.really.the.best.option. So, the following week, armed with cookies and a yoghurt drink we went to Gymboree again. This time I enrolled her on a toddler class with a longer module, Learning Lab for 3-5.  Her first day was a bit rough, but since the class allowed parents to be present, we made it through. The next few classes were a joy and she is now back to her happy little camper self. Oh and your wondering what the turtle was all about, it’s me being slow on the uptake and Sofie’s first art project in school. Not exactly a Rodin but the best turtle I have ever seen. Taddddaaaaa! 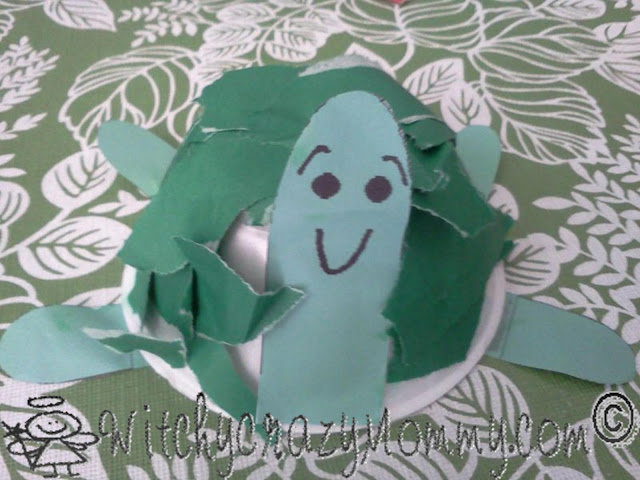